Once again, at the suggestion of David Ing, here’s a Facebook post that he felt would be appropriate for this venue and he asked me to post it:

Sometimes, when human beings are engaged in science, our Anticipatory nature leads us into Anticipatory Dysfunction. This is why I constantly caution people who are saying “trust science!”… Not all people doing science are good at it. And not all have good intentions, either, but that’s not what this story is about.

Excerpt: “Even worse were the predictions of how many teams would support each hypothesis. Whether made by the teams themselves, or by a group of experts not taking part, the predictions were wildly over-optimistic. The worst offender (hypothesis 2) was supported by the results of only about 25% of the teams, but its predicted support was about 75%. So not only did the teams not agree on what was true, they also couldn’t predict what was true and was not.”

A hypothesis is a prediction, interpretation is prediction, and then there are the predictions about which predictions would be supported by which teams… This is what I would call a SNARL.

I remember a guy (I’m sure he thought of himself as “a scientist”) who “proved”-- using computer models of women’s physiology-- that women could not possibly synchronize their menstrual cycles with other menstruating females they were in close proximity with, over time. And I just sat there, laughing, as I read his incredibly arrogant and ridiculous paper. Because I am someone who has lived with female physiology all my life and no digital computer model is going to be reliable for accurately representing such complex systems, first of all. Secondly, his own mental models for interpreting anything to do with female physiology were obviously biased as well as extremely oversimplified, from the outset (rendering him unfit to do science on this subject, in my opinion). And thirdly, my own experience (and I daresay the experience of all menstruating females everywhere) utterly and unequivocally contradicted his “conclusions”. I sort of wish I had memorized his name but at the time I was not interested in devoting the mental resources to doing so.

The point is that science is only as “good” as the scientists. However, good science (meaning: scientific work done by intelligent, creative, talented practitioners with strong integrity and commitment to the truth) is the only way to safely navigate dangerous situations like the current phase of human evolution on planet Earth. A great many of the ways we are interacting with our planet need to change, radically. How to do that so we don’t make things worse instead of better? Prediction, and modeling-- in science and in the human mind-- have a massive role to play in all of it.

So, it behooves us to engage in tests like this and then study what the results can tell us about our scientific reliability. My father’s Modeling Relation diagram would help them enormously.

See also https://twitter.com/justsaysinmice - and the book Invisible Women points out that they aren’t even /female/ mice - because female mice are too complicated for medical testing?!

What your perspective here really brings attention to - so often overlooked in how people receive campaigning approaches like the two I mentioned - is the absolute lack of intentionality, understanding, or consciousness of orientation on the part of those perpetuating such mistakes…

Just wait 'till they let the Fake Intelligences loose on science 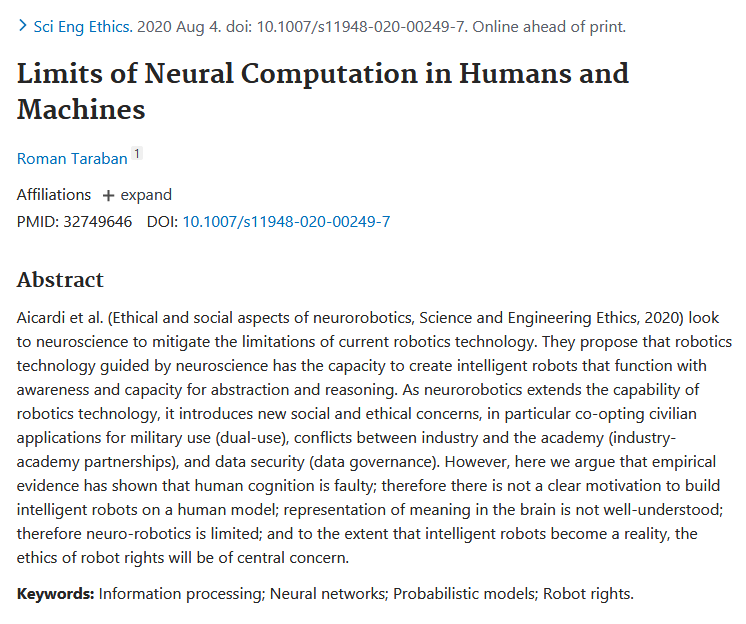 "Empirical evidence has shown that human cognition is faulty; therefore there is not a clear motivation to build intelligent robots on a human model" https://t.co/OiQCYnTHtM get rekt humanity