In June 2018, I joined the Centre for Social Innovation, Toronto, and was honoured to be accepted as a (pro bono) advisor to the Climate Ventures program new cohort that was being selected in August.

Since I have a lot of experience in systems thinking, one thought was to run a workshop. This was scheduled with the Agents of Change program on July 11, 2018.

The slides were made available in advance at http://coevolving.com/commons/20180711-systems-approach-social-enterprise . They are also now reposted at https://systemschanges.com/online/learning .

Shortly into the workshop, I discovered that I had mistargeted the audience, and had come with too much content. I switched over to doing more sketches on a flip chart.

Maybe someday the slides will have another use. 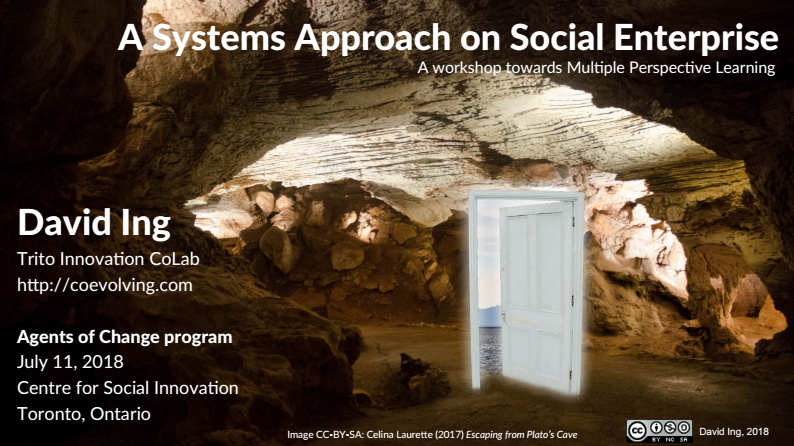 In “ The Systems Approach and Its Enemies ”, C. West Churchman depicts the struggles between reason (the rational mind), and four enemies: (i) morality; (ii) politics; (iii) religion; and (iv) aesthetics. Leaders who do not negotiate with the non-rational will end up dealing with the irrational.

Systems thinking guides us to critically reframe the way we see the world, through explorations of assumptions that we make individually and collectively.

Mastery in systems thinking develops on the time scale of years, not hours. However, open-minded teams can start productive dialogues that can inform actions that we choose, both individually and collectively.

In a few hours, we can start some discussions on:

(a) appreciating the value(s) that can be afforded to stakeholders with interests in coproducing outcomes, beyond consuming outputs;

(b) intervening in wicked messes by architecting offerings in service ecologies, as contexts for designing programs with effective production behaviors; and

© managing through dilemmas and double binds by prioritizing learning over optimizing.

David Ing invites participation in this exploratory dialogue. I am honored to be a past president of the International Society for the Systems Sciences (2011-2012). I graduated from IBM after 28 years of service, with assignments in management consulting, industry solutions, market development and headquarters planning. Doctoral research at Aalto University led to the publishing of a book, “ Open Innovation Learning ”, launched in February 2018. Prior degrees include a Master’s of Management from the Kellogg School at Northwestern University, and a Bachelor of Commerce from Trinity College at the University of Toronto. Small businesses are in my family history, growing up in Gravenhurst. We lived first over a restaurant, and then a furniture and appliance store. My blogging and publications can be readily found on the Internet at coevolving.com .

As cohorts, we can discuss how we might continue to advance our joint learning on a longer horizon. For continuing education, social entrepreneurs may benefit from the slower and nonlinear dialogues at the regular monthly meetings of Systems Thinking Ontario. This group meets every third Wednesday evening of the month, usually at OCADU.