Behavioral responses in an ecology (via For Better or For Worse)

Our recent explorations into the development of psychology (back to Tolman, Brunswik, Pepper from 1931) and systems thinking coincides with the appearance of a comic strip rerun in the Saturday Toronto Star. 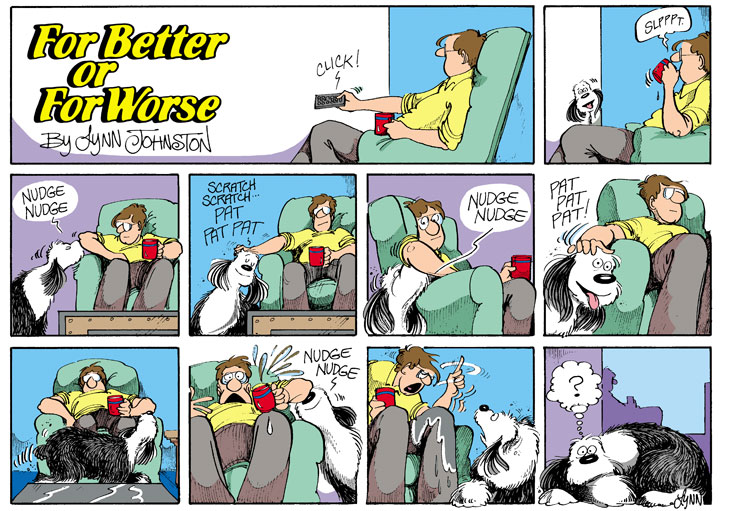 Here we have two systems co-responding to each other. Who is training whom?

(1) From the Gregory Bateson perspective on we have Farley (the dog) providing the stimulus (nudges), to which John (holding the coffee) responding (with pats). Farley repeats the stimulus (nudge), and gets the expected response, so we’ve got proto-learning.

However, then, when Farley moves from nudging the right arm to the left arm, he gets a different response. Did Farley think that John had been properly trained?

(2) In the causal texture perspective of Tolman and Brunswik 1935, we have both a local event and a distant event.

From that passage, following through with the concept map may help. (There’s a scalable SVG version, as well). 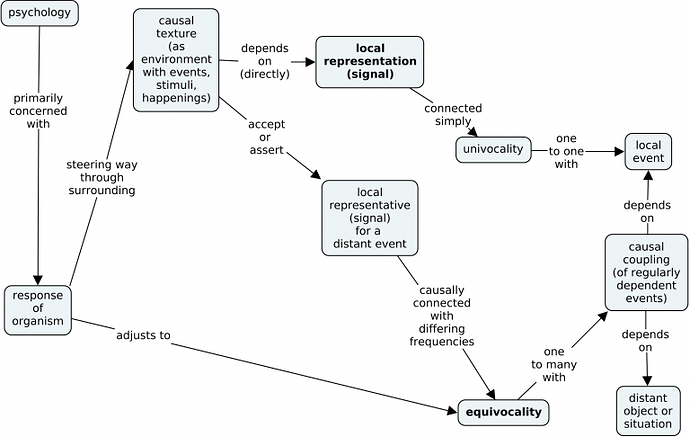 So, Farley takes nudging an arm and getting patted as a signal (local representation) of the causal texture.

However, Farley doesn’t take into account the equivocality of the connection between his observation of an arm for nudging, and the cup of coffee. After John responds angrily with Farley, the dog, doesn’t understand that there’s a causal coupling between the local event (nudging and patting) and the distant event (the cup of coffee that gets spilled).

This now draws us into the distinction, within the causal environment, between the transactional and the contextual. Farley (an organism) co-responds with John (a possibly higher-order organism), so they are in a transactional (i.e. action across two organisms) (and textural) relation. The coffee cup isn’t something that Farley engages with, but John does. That put the John and the coffee cup in an contextual (or better, contextural) relation.

For fans following along with Emery and Trist 1965, the L22 link is in the contextual (contextural) environment. The relation of John holding a cup of coffee is L22, but is (hopefully, for laundry bills) a one-time event that isn’t turbulent.