The Belbin team roles framework was foundational in the training of IBM Consulting Group assignments (i.e. ICG started in 1993, I took the course in 1994). At that time, IBM had licensed the method, and we used it to evaluate particular weaknesses on the formation of teams. Back then, there were 8 team roles. Now, it seems as though Belbin has evolved to 9 role. https://www.belbin.com/about/belbin-team-roles/

Reposted from https://chat.diglife.coop/openlearning/channels/systems-thinking on a thread around May 18, 2019.

There is a (unsanctioned?) team roles assessment at https://www.123test.com/team-roles-test/

My full team roles assessment is at https://www.123test.com/team-roles-test/id=WG6UBX2SP5AE 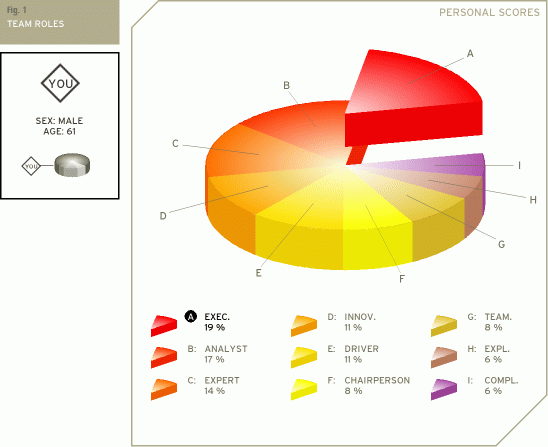 In the Leaders Expedition discussion, I had written (about my assessment):

This self-assessment isn’t much of a surprise to me. Compared to others, the scores are relatively flat (i.e. low variance). Some people have a huge peak in one area (e.g. scoring 70% in one area), and next-to-nothing in others.

My weaker side is that I’m less of a team player (although not by much, because the scores are so flat) and am not so much a completer-finisher (but previous research found that true completer-finishers are rare in society, so I’m often the one pressed into that role).

The way that such instrument are used aren’t so much for the individual as they are for team. If there’s an issue with a missing team role, we look to the individual with the strongest score in that area (even if the predisposition is low), and ask them to focus on it.

In our local teams, it may not be practical to be so analytical in choosing additional members as we grow, but we should be conscious of what each individual might bring to the mix.

Reposted from https://chat.diglife.coop/openlearning/channels/systems-thinking on a thread around May 18. 2019.