Entropy and Tenet (the movie)

Systems thinking fans of the movie Tenet, by Christopher Nolan, may be immediately challenged to test their understanding of entropy, as the premise for temporal inversion.

Journalists aren’t scientists, so their writing may stand up to criticism.

Here is (in my opinion) a good description.

As Nolan puts it in the film’s production notes: “Every law of physics is symmetrical – it can run forwards or backwards in time and be the same – except for entropy." Entropy, for those who’ve forgotten their teenage physics lessons, is the degree of disorder in a system. According to the second law of thermodynamics, as time moves forward, entropy can never decrease – it either increases, or remains the same. Which could mean that what we think of as time is, in fact, merely a perception governed by our observations of entropy. If we see disorder decreasing, we think we’re seeing something moving backwards in time.

“The theory being that if you could invert the flow of entropy for an object, you could reverse the flow of time for that object, so the story is grounded in credible physics," Nolan says. "I did have (Nobel Prize-theoretical physicist and consultant on Interstellar ) Kip Thorne read the script and he helped me out with some of the concepts, though we’re not going to make any case for this being scientifically accurate. But it is based roughly on actual science.” 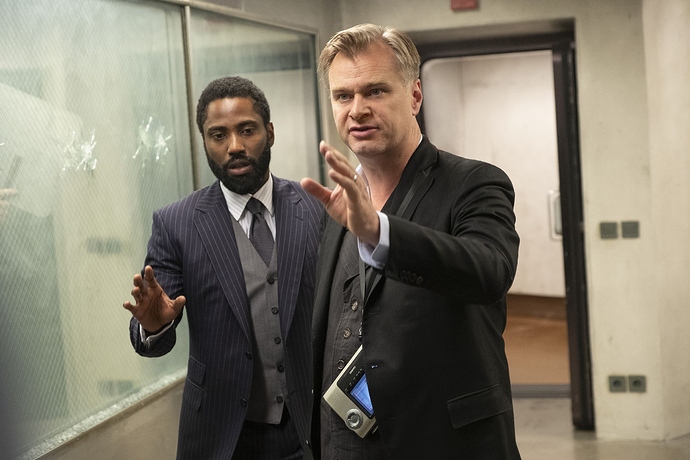 Here’s another review, where a finer appreciation of science sees a rew traps.

Tenet, however, is based on the idea of reversing entropy.

So rather than delving deeply into the Special Theory of Relativity, we’re looking at basic thermodynamics. Now first, awkwardly, entropy isn’t a process, so you can’t reverse it.

The second law of thermodynamics states that the entropy of a system will always increase.

This doesn’t mean it’s physically impossible to freeze things, obviously. You can freeze water, but a freezer generates heat, which radiates outwards in ways that will require yet more information to describe – while entropy might appear to be decreasing inside your fridge freezer, the overall level of entropy in the universe has still gone up.

On a small scale, this is why your perpetual motion machine will never work – it will always be giving out at least some waste heat. On a large scale, this is the process by which the universe went from being a ball of energy occupying an infinitely small amount of space, to that energy being uniformly spread out across a cold and unfeeling void some time in our future.

So here’s the thing – because the second law of thermodynamics states that the amount of entropy can only increase, throughout history many scientists and philosophers have used the increase of entropy as a handy by-word for the arrow of time – the idea that everything moves from the past, to the future.

Tenet posits a process for “inverting” entropy in objects, which in scientific terms would mean that the amount of information needed to describe a system would be reduced. Rather than becoming more disordered and chaotic, energy would, from a forward-moving person’s perspective, spontaneously come to together and create order.

If you do the first break in a game of pool, the balls will scatter across table. If you use an inverted pool table, the balls all rush from around the table to form a triangle in the middle, which fires the white ball at your pool cue.

This is, of course, completely impossible comic book science with absolutely no bearing on anything in real physics, but it has some fun implications.

Firstly, if you like Ackoff’s definition of process, he reads this as “arrangement in time”. Saying that “entropy isn’t a process, so you can’t reverse it” is kind of okay, as it can be taken as physical law. If the order in a system is changed, the original arrangement might be restore with some energy (effort) … but sometimes that restoration might not be possible.

On a second point, something that I learned in big data class – related to algorithms used in data science – is that information entropy doesn’t necessarily have anything to do with entropy in the more general case. This shows up in …

Of course, for someone who is new to the word, there’s also …

These fine points did not deter me from enjoying the movie, Tenet!

Wow, David, you really drank the ‘science cool-aide’ … to use a 20th century culture allusion.

In point of fact, Nolan’s thesis is exactly correct – IF – you want the correlations of entropic gradients with the “flow of time” … to be -consistent- in use and application … in all situations and events.

EVEN IF … no current phenomenological model (let alone ‘math equations’) … make that correlation.

Let’s use another not-well-thought-through concept … which has to do with neurology and awareness … “thinking” ,… as humans call it.

AI, in computer sensibilities, has persistently ‘forward in time’ processing of instructions and data. -Always- …“forward time”. Even when search routines go to retrive ‘data’ in stored memory.

But! … it is not unreasonable to consider … in human experience … that “memory” … past experiences templated in neurology … has to be …“recalled”. With the sensibility that if someone asks you a question, you have to ‘go backwards’ into -prior- experiences and knowledge, evaluate what is appropriate information to respond with, and then produce a reply.

So --effectively-- …all the while the everything is “in the overall” … moving forward in time, you are process and reviewing ‘prior data’ in reverse order … in order to re-access it, re-use it … via … re-collection… A mind simultaneously … persists “time forward” while engaging in virtual “reverse information access” … which sorts and evaluates -memories- … via ‘reverse time’. Information -is- prior-time ordered negentropy…

The issue is that conventional ‘science’ based on … rigid association of entropy with thermodynamics and in particular … the "ability to do work … resists and rejects the appropriate correlations with "what factors are involved with evaluating energy properties’.

Entropy of the 18th century was built on volume, temperature, pressure factors which were UNMEASUREABLE with any exactness and to the modeling was written as statistics … for lack of inner details.

Where the details -should include- … velocities, distances, vectors and time. Where the missing -information- is . .more Brownian in required specification.

A) what -knowledge of- direction and velocity from each particle interaction to the next, are involved? How long will it take between interactions? What distance(s) are specifically involved?

Gas systems enact the “information” … and human measurements are limited from identifying that knowledge. BUt that doesn’t mean that that data~information is insignificant.

“Entropy” … and “negentropy” … are gradiented variations of … space, mass, density, momenta, vectors and time … AND … field strengths around particles … not TVP. … lumped together in some vague notions of .“high net energy” versus “low net energy” … with some “general tendency of the universe” being the grand deduction.

AND … the implausible (per the old TVP model) … the reality of time reversed processes CONSISTENT with time-forward processes … and how they integrate together.

If science can handle and accept a ‘fixed speed of light’… where time at the top of a sky-scraper building runs.different from time in the basement … even as ALL the atoms of the building are fully connected and behave synchronously … [which disparity should -really- have science jumping over itself to “logically justify and explain”] … then a similar coupling of time-forward with time reversed … should be an accepted “no brainer”. :-)))

“Energy” is a -product- notion … and an incomplete and not fully developed notion at that.