Schools of Thought in Systems Thinking

Systems thinking can be seen as a construct that has been shaped by many luminaries over time.

One place to get sense of the heritage of schools of thinking is via:

This takes a historical approach, and provides representative excerpts from each author.

I will freely admit that my experience in the International Society for the Systems Sciences predisposes me into a synthesis of three of these categories. (If you haven’t noticed that before, you might take a look at the book!)

I just noticed that the second edition of this book is 324 pages, while the first edition is 298 pages. 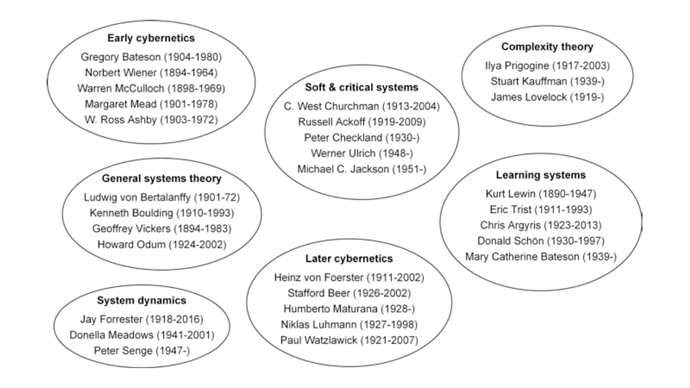 In the “Introduction to the Second Edition” …

The second edition of this book is extensively revised from the first edition. We have studied each chapter thoroughly and amended it in the light of new scholarship about the thinkers and their work. [p. xxi]

Taking all these resources together, we have revised the ‘narrative’ parts of each chapter (describing the life and work of the thinkers, as opposed to extracts from their work). […] The publisher (Springer) kindly agreed to let us increase the length of the book a little, but not by a huge amount, so we have sought to prune as well as grow the chapters.

There are things that in a different kind of revision we might have amended but have chosen not to change here. We have left intact the existing readings from the thinkers – we considered each one carefully, and all represent the authors well. We have also not changed the list of thinkers discussed in the book. We thought long and hard about this issue. I have frequently been asked at conferences why particular authors were not included, sometimes with considerable passion. In the introduction to the first edition, we mentioned a number of names who could have been included and would stand by all these. The authors we most often have been asked to add, or ourselves regret not including, are Joanna Macy, Gordon Pask, Bela Banathy, Edgar Morin, Donald Mackay and Ken Wilber. However, to incorporate further authors would have meant increasing the book significantly, potentially unbalancing the groupings of authors, and also a considerable amount of work, so we decided not to do so in this edition.

We also decided not to remove any of the authors from those in the first edition. We gave our rationale in the previous introduction as to why we included our original authors. This rationale still stands good and still applies to all included. In each case, when reading the original chapter, we asked ourselves whether the author still had a place in the book and were very clear that this was the case for all 30 authors. All of the authors are important, and some are extremely relevant today, some even more so than when they first wrote, while some are not widely enough read (such as the work of Geoffrey Vickers and Donald Schön); others are more of their time and introduced important ideas which others have built upon.

Magnus writes more about the 10 years that passed between the first and second edition, and including attending conferences and editorial work.

This evolution reflects a slow and gradual progress in science.

Does the book feature a diagram that shows how these particular branches fit in context with one another? That would be a helpful map of the landscape.

Does the book feature a diagram that shows how these particular branches fit in context with one another?

The introductory chapter is very brief, with only the one diagram. The rest of the book is biographies and excerpts from each of the cited researchers.

I’m not sure that “branches” is the right way to express the interactions between these figures. Tim Ingold uses the term meshwork, that may be a better descriptor.

Even through organizational ties, there’s some intermixing. As a former president of the ISSS, I observe how the agenda changes from year-to-year, as the leadership evolves.

The way to track influences from one author to another would have to be through cited works to each other. If someone wanted to take on a data science project, it would be an interesting validation of the clouds that Ramage and Shipp took to see if the intersection set is low.