On the way that education, sociology and systems thinking hang together, a master’s thesis by Janne Salovaara resurfaces the design of the Creative Sustainability program at Aalto U., from 2015.

Janne was in the first cohort of the program, when I was piloting the first two courses in 2010-2011. Subsequently, the systems thinking courses were rotated later into the program, as the program designers realized that teamwork and mindset were better earlier. @s.nousala came onboard for that change in 2011.

More than a decade later, it’s interesting to see reflections on the experience (for Janne, 5 years later) on the challenge of learning (and teaching) systems thinking.

… the two Systems Thinking courses covered the general concept of sustainability and actions. Systems Thinking for Sustainable Communities was a crash course covering several different eras and ideas in systems thinking, theory, and philosophy. The class combined lecture, group activities, and, after class, blogging concerning the course content, and 10 smaller essays concerned the 10 theories presented: collapse of a system, panarchy, teleology, holism to reductionism, self-organized learning and regulated systems, open systems to closed ones, forecasting, and cybernetics. Although it may have aimed too high, this class was a tremendous learning experience and the theories presented in it have stuck with me, even today. [pp. 42-43]

Holism is as noble as sustainability. To draw the big lines with fat markers and believing, just telling yourself that this is the plan by this fat marker I’ll stick to it. And then again planning, or executing the plan that doesn’t have lines, is really not a plan at all. Planning an open system sounds like the best possible solution in sustainability-wise. But open system might be too vague of a plan to be executed by everyone.[14]

The second of the systems classes, Systems Thinking from Planners and Designers, explored systems thinking as applied within the student’s field, For instance, Design students came to understand iterative processes that fluctuated between reductionism and holism, the systemic character of products and their life- cycles, and so on. As the first systems course was about “what and why,” the second was about “how” to use systemic thinking to benefit sustainability in design and planning. At the conclusion of this course, I wrote an essay called “Collapse by Design” on deliberately designing a weak point into a system that would break and so save the rest of the system when the system is subjected to immense pressure. The idea arose from combining several of the theories taught in the course—panarchy, self-regulating and complex systems, and forecasting and transformation. From that essay, here are some of my final thoughts: [p. 43]

Whether simple society is more sustainable or resilient than a complex one or complexity helps or just automatically becomes more costly; one thing is apparent to me—complexity follows the need of the output and if the envelope gets pushed enough, complexity will multiply and turn against itself. System doesn’t fail on added complexity by its parts, but by the output requiring it or surroundings doing so, and that will make the system teeter. System itself doesn’t regulate its complexity and if we would want to build a resilient system to be self-sustainable, the best way to do this would be limiting the complexity of it, not to push for the maximum benefit of it. A good indicator of this would be that when the parts, or the system of a system, stops to understand the necessity or the language of another, maximum complexity level has been reached. Alienated parts in system are the afterbirth of its uncontrolled breeding. When in societies internal parts stop to have common ground to build on, or other external societies stop to have common interface with it— complexity level has been reached and that should tell us where we are in history. [15]

There has been debate as to whether systems thinking should have courses of its own or whether the content of these classes should be integrated in other, more practical courses. In my view, either would work, although differently. Being an integrated part of other courses would make sense if applicability of the content isn’t for some reason clear to students. And it’s not always apparent on a detail level, but every good plan or design should be done coherently, and the systemic method is the natural and almost only way to do this. Being integrated in classes on other subjects would fail to give systems theories the attention they deserve. Applicability to the planning or design process isn’t the only beneficiary of systems thinking; rather, the entire science of sustainability is as well, and systems thinking is extremely helpful in understanding internal workings of process. As the philosophy of science educates us as to how we create science, systems thinking educates us as to how things are and how we can make sense of them, i.e., how we define them to understand them. Further, it’s only by understanding their behaviour that we can affect them.

In conclusion, I personally enjoyed the two systems courses, which I found impactful. They managed to combine heavy theory and concreteness. Their main thrust was the complexity of sustainability issues and their interconnectedness and causality relationships. [p. 44] 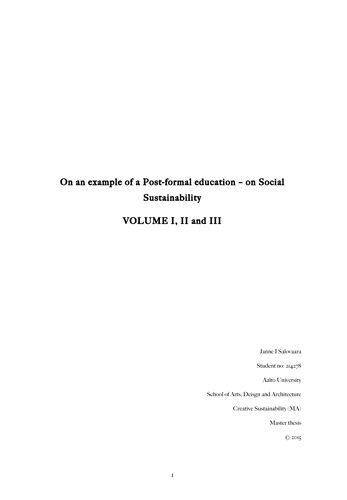