Finally had a few moments to read through @daviding post re: Causal Texture, Contextualism and Contexural (http://coevolving.com/blogs/index.php/archive/causal-texture-contextural-contextualism/) and it reminded me of some of my thesis work; especially the connection between Tolman. Posted on LinkedIn and re-posting here.

Of particular interest was the presence of Tolman’s work. Tolman demonstrated that animal behaviour was more complex than simple stimulus-response which was divergent from mainstream thought at that time.

For me, there’s a lot to be learned by observing the evolution of the state-of-the-art in systems research.

In the first of four lectures at OCADU in winter 2020, I presented a slide summarizing a distinction between behavioral psychology and ecological psychology. 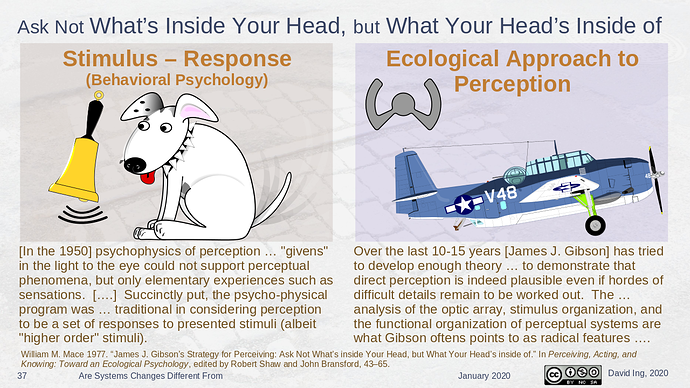 In 1950, J.J. Gibson would publish The Perception of the Visual World, and would become recognized by his peers in psychology. It wasn’t until 1979 that The Ecological Approach to Visual Perception would provide more philosophical foundations leading to the idea of affordances.

In 1965, Emery & Trist would publish “The Causal Texture of Organizational Environments", that would introduce the socio-ecological systems perspective (that should be framed with the socio-psychological and socio-technical).

In 2000, Tim Ingold published The Perception of the Environment: Essays on Livelihood, Dwelling and Skill, that pieced together J.J. Gibson with the work of Gregory Bateson (who originated, but actually didn’t publish ecological epistemology).

So, while novices are still trying to make sense of “Ask not what’s inside your head, but what your head’s inside”, there’s been a more recent advance that has helped my understanding.

In 2017, Tim Ingold published “On Human Correspondence”, that brought the idea of being alongside – not just what’s inside your head, or what your head’s inside – that helped me with Open Innovation Learning (Ing, 2017).

I didn’t read all of this research in the sequence that they were released. For someone new to the variety of ideas in the systems sciences (i.e. the ISSS), there’s a lot to sort out.

I also have not read the papers in this sequence; mind you much of my reading on this topic had been focused more on the “traditional” research; Tulving being one of them to add the temporal piece to this conversation.

It’s also interesting to see new research coming out suggesting that cognition is actually developed by and influenced with information collected through spatial and temporal elements. One such recent paper was done by Max Planck Institute for Human Cognitive and Brain Sciences. “Navigating our thoughts: Fundamental principles of thinking.” ScienceDaily. ScienceDaily, 8 November 2018. <www.sciencedaily.com/releases/2018/11/181108142443.htm>.