Chris Alexander has written that there can be as many pattern languages as there are people. In subscribing to his assertion, I struggle with the practical implications in a design, build something world.

Maybe you’ll feel better (or worse) if you substitute the words “systems” for “pattern languages”, so that …

… which is even worse, because every individual should see (or be engaged in) more than one system.

The practical implication is that we collectively engage in designing (or better, architecting) systems in which we live. 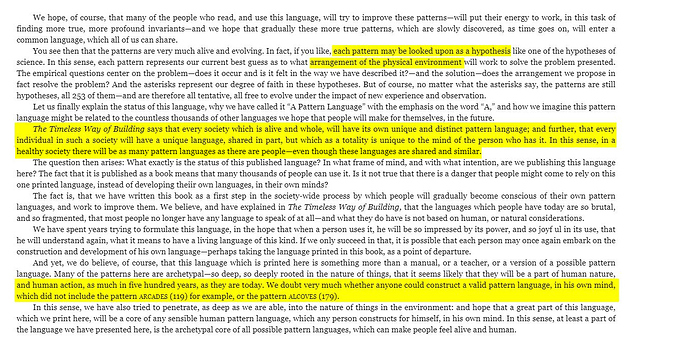 The excerpt (and highlights, thanks, @engdan ) from A Pattern Language draws attention to many points that I’ve made about Christopher Alexander’s work.

each pattern many be looked upon as a hypothesis

Christopher Alexander saw himself as a scientist. This meant taking a scientific method, in the sense that science (as human knowledge) moves forward. If we take the shortcut definition of a pattern being “a solution to a problem in context”, with a scientific attitude, this could mean that the solution, problem and/or context might be redefined … or our understanding of them may have been changed.

arrangement of the physical environment

This is a strong statement about the self-described limits by Christopher Alexander himself. He works in built physical space. He declares that he doesn’t work in social systems

So, those who cross-appropriate pattern languages over into other domains should know that they don’t really have the blessing of Christopher Alexander (should they want to espouse such).

does it occur and is it felt in the way we have described it?

In built environments, Alexander is architecting physical spaces. We might challenge as to whether they are well suited for agoraphobes or claustrophobes … but that gets into the target audience, beneficiaries and/or funders behind the construction project.

The Timeless Way of Building says that every society which is alive and whole, will have its own unique an distinct pattern language

This is precise. Firstly, the reader should check that The Timeless Way of Building is volume in the series from the Center for Environmental Structure, preceding A Pattern Language. However, in the releases of the book, readers might get confused that the 1977 APL buildings on the 1979 TWB.

From there, we should acknowledge that this is A Pattern Language, and not THE Pattern Language. This leads us to the third related work, The Oregon Experiment, that sets out governance for the ongoing built environments at the University of Oregon. That’s not the Hunt’s Point of the Multi-Service Centers work.

Further, it’s not the pattern language described in The Battle for Life and Beauty of the Earth, that describes the planning and construction of the Eishin school in Japan.

In guiding people to understand Christopher Alexander, I encourage reading backwards – from the last published work (i.e. Battle), and then understanding the work that precedes it, in a scientific style. Christopher Alexander, as has every mortal human being in the world, written what he knows at that point of time in publication. Thus, if you were his age, would you want to be appreciated for a publication done in the 21st century, or the one in 1977?

we have written this book as a first step in the society-wide process by which people will gradually become conscious of their own pattern languages, and work to improve them.

Could we take that sentence, and change “their own pattern languages” to substitute “their own systems changes”?

We know more now, than we did 2 years ago. Maybe we’re moving from the collective state of “unknown unknowns” to “known unknowns”. That would be progress!

Just like in mathematics, symbols such as "+ - * / = " are the elements of the math language and the “order of operations” defines the basic rules for how the elements, addition, subtraction, multiplication and division can be used together in arithmetics. Similarly in music, scales are patterns of how notes can be arranged together to form a melody. These scales, when used together, form different music genres such as classical, jazz, pop etc. We can say that each music genre has its own “music pattern language”. In fact, each composer in the same music genre also has his/her own voice (or pattern language). That’s why classical music lovers can tell if a piece is from Chopin or Beethoven.

The design of a town or a room or a community usually requires one or more patterns. Architects who are familiar with Alexander’s pattern language may simply say "we need a ‘promenade’ " to mean Pattern #31. However each architect or architectural firm may have their own way of communicating about and describing their design and thus has its own pattern language.

A software developer may simply say “let’s implement a ‘bridge’ for this application” and fellow developers would understand it to mean one of the 23 design patterns named “Bridge” from the Gang of Four. However each developer usually has his/her own unique coding style that becomes his/her pattern. In my IBM days, I had done code inspections and in one project where I did code checks often, I could tell whose code it was from simply by reading the code - the pattern can be quite clear from one developer to another.

This is my understanding of Alexander’s notion of “there can be as many pattern languages as there are people”. I hope it helps.

I first learned of Alexander’s books from this paper written by Brad Appleton in 1997/1998. It has a nice description of the origins of pattern and a great synthesis of Alexander’s pattern principles. You can download the paper here: http://www.sci.brooklyn.cuny.edu/~sklar/teaching/s08/cis20.2/papers/appleton-patterns-intro.pdf
or read it here: https://www.bradapp.net/docs/patterns-intro.html.

Having had some software development in my background (although I was never very good at it) I found that your “Bridge” example resonated with me. Sounds like your Appleton reference is a must read. Thanks for your help on this subject.

Taking a systems perspective on pattern language and thinking critically, as you read more, you might consider:

I am am advocate for pattern language, coming from the Christopher Alexander heritage. If you’re not an architect for a built environment, you should be taking personal responsibility for cross-appropriation.

Or you really want the wisdom of an automobile mechanic to be advising you on medical issues?